Nainita composed the FOR SAMA score which recently won Best Documentary at this year’s BAFTA’s. The film is an intimate and epic journey through five years of the uprising in Aleppo, Syria as Waad al-Kateab’s falls in love, gets married and gives birth to Sama, all while conflict rises around her. 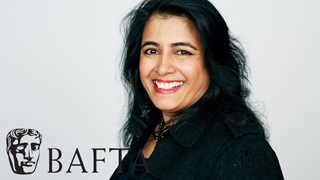 Nainita was born and brought up in London to Indian parents and her eclectic musical upbringing as a child led her to study the sitar, piano, guitar, tabla, singing and violin. Nainita obtained a degree in Mathematics before attending the NFTS specializing in sound design. Her passion for music technology led to her working in music engineering working with many top artists and bands ranging from The Damned to Tori Amos. This led to work with Peter Gabriel during the legendary Real World Recording Week sessions and working with the top music artists including Billy Cobham, Daniel Lanois, Jane Sibbery, Nigel Kennedy, Sinead O’Connor, Ravi Shankar.

Nainita has worked in British television for over two decades scoring countless BAFTA, Oscar and Emmy acclaimed productions. Discover more about her journey at the Short Sounds Film Festival on Friday 28th Feb 2020.